Without a doubt the most unusual baroque monument in Reggio, the church, designed by Gaspare Vigarani, was built with a baroque façade and contains three churches enclosed like Chinese boxes. 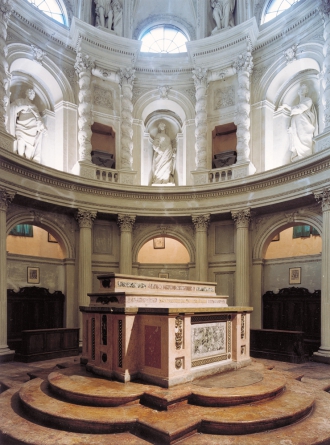 The central part of the church is quite ancient, dating back to around 857.
In 1400, the church was taken over by the Brotherhood of St. Jerome, who would entrust its reconstruction to Gaspare Vigarani in 1646. Vigarani was a famous architect and scenographer who had also worked in France for the court of Louis XIV.
The inside of the church is particularly original, as it is made up of three sacred areas connected by hallways and marble staircases. One of the stairways, known as the “Saintly Staircase”, was modeled on the staircase in Rome at San Giovanni in Laterano. The first church is rectangular, and is located at the front arcade; the second, known as “The Rotunda”, is built on two orders of overlapping colonnades decorated with stucco statues of saints; finally, the “Underground” (Crypt) contains a reconstruction of the sepulchre of Jerusalem.
Also worth seeing:, a beautiful fresco from the 1400s portraying Madonna with Child located in the upper church; the drum and dome in “the Rotunda” decorated with stuccos and statues of angels and saints