One of the oldest churches in Reggio, a document from 1140, in which Archbishop Gaulterio confirms the Cathedral of Reggio Emilia to the Canons, mentions the Church of St. Peter , then located on the outskirts of town, towards Modena. In 1513, bishop Albericone consecrated the church, which Pope Leon X gave to the Benedictines of San Prospero.
At the start of the 17th century, on a project by Giulio della Torre, the current church was built, to which a dome designed by Reggian Paolo Messori was added (Messori took inspiration from the dome of St.
Peter’s in Rome). 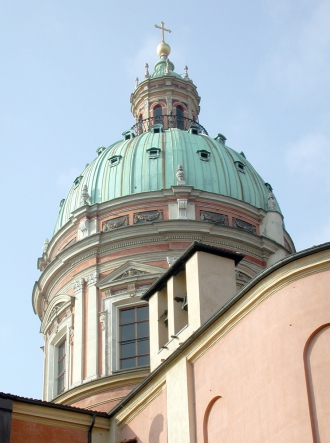 The inside is based on a Latin cross floor-plan with a single nave. Handsome carved, baroque era choir stalls by Giacomo Cocconcelli are contained within. The church furthermore contains several retables in stucco, marble and wood from different eras, but primarily from the 1600s. Among the many important paintings are: in the left aisle, the S. Scholastica chapel contains the Trinity of Saints by Alessandro Tiarini, who also painted the Martyrdom of Saint Barbara (1625) in the third chapel; the second chapel contains a beautiful St. Michael the Archangel by Pietro Desani (1627), while in the first is The Martyrdom of Saints Placid and Bibiana by Paolo Emilio Besenzi (1648); the right transept contains St. Peter and St.
Gioconda by Mastelletta (1639); the dome contains Eternity in Glory and Angels by Camillo Gavasetti (1630). 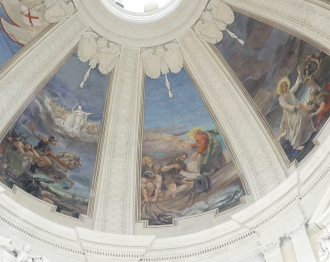 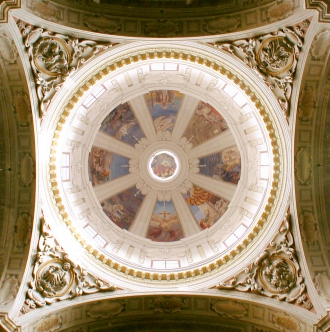 The cloister of the Benedictines, in via Campo Samarotto, was once an annex to the church.

St. Peter's Benedictine cloisters
The two cloisters belonged to the Benedictine Monks who officiated in the annex to the Church of St. Peter. 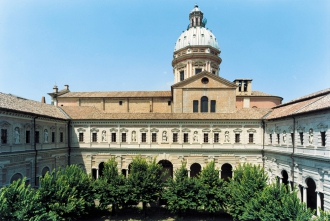 Large Cloister of the Benedictine convent of St. Peter. By Prospero Pacchioni, 1580-84 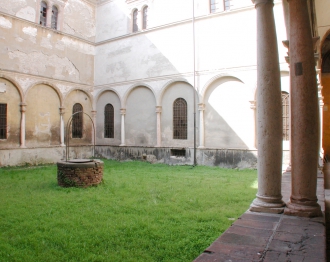 Small Cloister of the Benedictine convent of St. Peter. By Bartolomeo Spani, 1524, from designs by Leonardo Pacchioni, 1520

Built on three orders, with a columned portico, the cloister recalls the style of Brunelleschi. 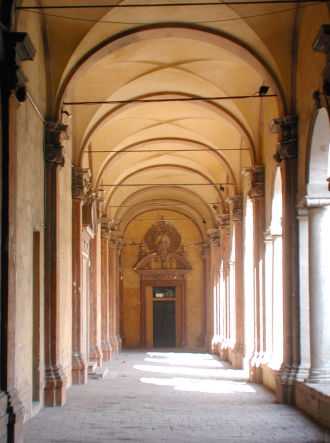 View of the porticos from the large cloister

Some paintings are visible, but unfortunately, most of the decorations were covered by a layer of whitewash during the fifties. The large cloister provides an impressive sight, with the upper loggia running along the length of the fa?ades, sumptuously decorated with terracotta statues by Bernardo and Francesco da Lugano. 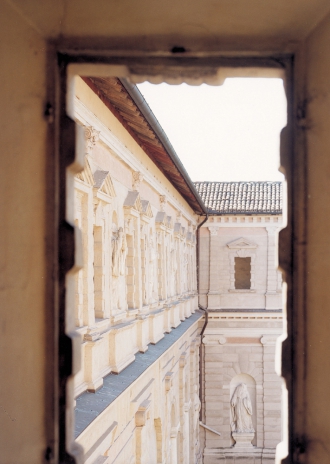 View of the upper order windows


Inside the cloister, one can also visit memorials to victims of the Risorgimento and of WWI, as well as the historic Hall of Cavalry Arms.
At present the cloister is also home to the military barracks “Taddei”. The City government is in the process of restoring and recovering the cloisters, which are already used periodically for cultural activities.