At the start of the 15th century, the first Jewish families received permission from the Reggio Senate to settle in the city in order to open a service for loaning money on interest, something Christians were not permitted to practice at that time. More than a century would pass in Reggio Emilia before the papal order to institute the ghetto (Papal bull “Cum nimis absurdum” of Pope Paul IV- 1555) was obeyed. It was Duchess Martinozzi, widow of Duke Alfonso IV, ruling in the name of her underage son Francesco II, who ordered that Reggian Jews be obliged to reside in the streets now named San Rocco, Caggiati, della Volta, dell’Aquila, and Monzermone. 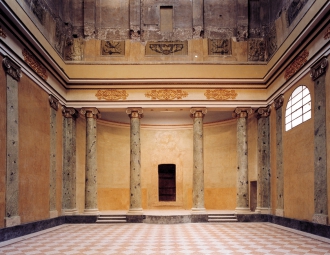 Until that time, the Jewish population in Reggio was living “dispersos per urbem”. The Synagogue of Reggio Emilia was erected in 1672. Over the course of two centuries, a number of works attempted to morphologically redefine the sacred image of the building, especially in regard to the ornamentation. Then, in 1849, it was decided to rebuild the synagogue due to its extreme state of dilapidation. Development of the building plan resulted quite complex from the very beginning; construction issues of an architectural and a symbolic/religious nature became key elements for the entire building project. In the end, the project was entrusted to architect Pietro Marchelli, and the inauguration was held in January 1858. After World War II, when the Jewish community in Reggio merged into the Modenese community, the synagogue stopped being used for religious services and took on a number of different uses. During that time, almost all the furniture inside was sent to Israel. Among the objects removed was the beautiful Tabernacle from the 1700s that is now located in the synagogue in Haifa.
Prior to the recent restoration, the building still carried signs of WWII bombings. However, despite the vicissitudes of the building, its original structure was nonetheless easy to recognize in the large hall with high ceilings which ends in a semi-elliptic space, separated from the main space by ionic columns. The columns, which are repeated like pilasters, set the rhythm for the other walls. In the webs of the pavilion vault, traces still remain of the original painted decorations. Restoration of the historic building, promoted by the Government of the City of Reggio Emilia, was integral: preservation and consolidation were not reduced to a simple aesthetic intervention. Instead, the project aimed to recover the original value of the functions traditionally carried out there: transmitting of knowledge and cultural education of the community.