According to historian Tito Livio, in 187 B.C., after defeating the Ligurian tribes settled in the Apennine Mountains, consul Marco Emilio Lepido set about building a road to link the cities Arimium and Placentia, which took the name Aemilia from him. 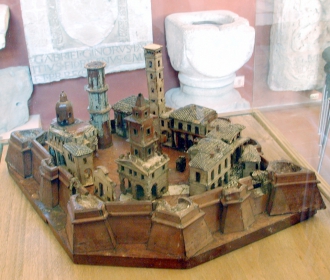 Model of the City of Reggio Emilia

While sources do not name his specifically, it was no doubt the same person who was responsible for building the original Reggian settlement, which in fact carries memory of the consul in its name. Thus it can truly be said the Reggio Emilia was born with the via Emilia. The great consular road was furthermore the east-west running Decumanus of Roman Reggio, while the Cardo or north-south axis was the road now known as via Roma. Still today, the intersection of these two roads (in the heart of Reggio) is marked by a plaque in memory of “il groma”, an ancient Roman measuring tool that indicated the intersection of the two great roads and marked the place where foundation of the city was to begin. 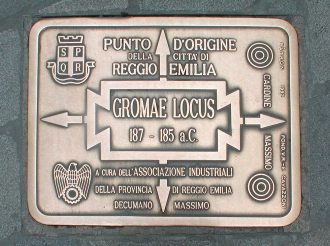 Locus Gromae, point of intersection of the Decumanus and the Cardo, axes upon which the Roman city was built. In the case of Reggio Emilia, the Decumanus is represented by the via Emilia, while the Cardo is the axis where via Roma now runs.

Starting from the 4th century A.D., at the time of the war between Rome and the barbarians, the situation became more serious following the Fasti of the Roman era. Nonetheless, the settlement of dwellings during the late Roman, high-medieval era was still concentrated around via Emilia. In short, the road would remain both the center of the city and the link to the rest of Emilia.
The current route of the via Emilia, which has kept its Roman name, retraces for the most part the original consular road, thus representing a topographical and cultural common denominator for the entire region. Confirming this continuity is the discovery, by Otello Siliprandi in 1931-32, of a long stretch of the Roman via Aemilia between via S. Girolamo and via Guidelli. Further traces were found in 1947-48 by Mario Degani between via Mazzini and via Monzermone. 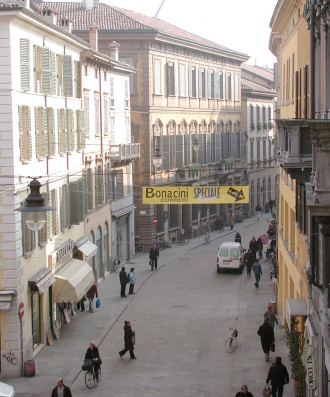 Via Emilia - San Pietro, view of the Captain's Hall in the building of the same name

Reggio’s most representative road, the heart of its business and even its ‘living space’, the via Emilia is a succession of buildings, markets, shops and churches. The stretch between city gates porta Santo Stefano to the west and porta San Pietro to the east is characterized by beautiful paving: the two gates close off the historical center and mark the most specifically Reggian stretch of via Emilia. 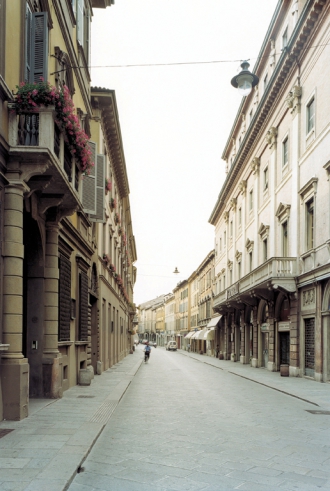 From the intersection with via Guidelli to piazza del Tricolore, the street is defined on its south side by porticoed homes; the north side is instead characterized by neoclassical style buildings from the 1800s, designed by Domenico Marchelli. 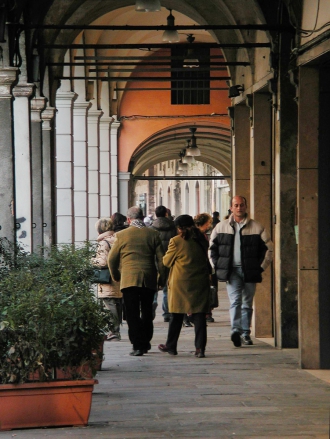 Via Emilia - San Pietro, view of the porticos

The contrast between the two sides of the street is by no means unpleasant, and it in fact bears witness to Reggio’s architectural vividness. The via Emilia has an almost straight, uninterrupted path only from piazza Cesare Battisti. 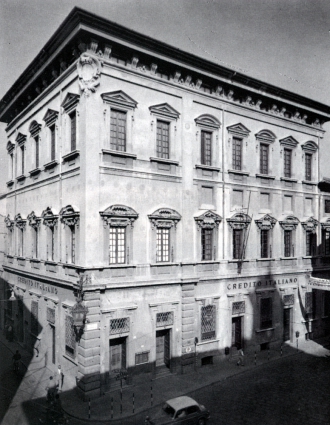 On the north side of the square Battisti you can see Palazzo Bussetti (1657), attribuited to Bartolomeo Avanzini

It is worth remembering that via Emilia dictated construction of the city outside the historic center as well. Especially to the East, near the old lazaretto which is now S. Lazzaro hospital, a number of interesting artistic and urban experiences have taken place. Take, for example, the beautiful Renaissance villa del Mauriziano where Ariosto stayed, or the group of nineteenth century buildings erected by architects Paglia and Marchelli in accordance with a precise plan for urban expansion.